Why are you here?

If you’re looking for a job with a paycheck, salary, a manager and a clock to punch, you’re in the wrong place. Please note, this is a business opportunity- a system and a team to help set you up to succeed as the CEO of your own life.

If, however, you already have a paycheck and are looking for something more, please read on. Perhaps you want to become a business owner or create limitless income. Maybe you want the freedom to call your own shots and be compensated for your own merits, not a manager’s opinion of you.

Please read through all the information on this page. If it feels like a good fit, you can sign up at the bottom. If you have questions, you can schedule a chat. Either way, consider this option carefully, because it can absolutely change your life.

What is This Crazy Thing?

We’re in the financial services industry. We write plans that cover homes and families in the event of death or chronic or critical illness, including cancer, heart attack or a stroke. We also help hard-working folks with tax-free retirement options. With mentorship from Life Matters and the Valdez Group, literally anyone from any background can do this, provided you have strong work ethic and the right attitude.

And if you decide to build an agency, Equis Financial provides a turn-key platform to support you, including home office support, onboarding, weekly training and cutting-edge technology that monitors all aspects of your business. We’ll cover all this in detail below.

And Equis Financial provides all this with no monthly membership fees or agency fees. If you’ve ever looked into owning a franchise, you’ll know how rare that is.

Equis Financial is the fastest-growing company in the financial services right now and we are looking for professionals who enjoy working with and helping people. As an agent, you simply respond to requests for more information (warm leads). THERE IS NO COLD CALLING REQUIRED. In fact, our parent company spends millions of dollars every year to ensure our marketing is first class.

The Statistics Are in Your Favor

Here are some additional statistics.

What does all this mean? It means opportunity!

These are the types of problems you’re helping to solve when you join the Equis team. You can feel good knowing you’re helping homes and families with coverage they want and need. You have the opportunity to specialize in any area, including Mortgage Protection, Final Expense, Advance Markets (IULs & Annuities) and much more.

At our core, our bread and butter is protecting middle-class Americans using life insurance with living benefits – coverage that pays out if you don’t die (like when you get a chronic, critical or terminal illness). Our plans have allowed folks to use their death benefit to help with things like a heart attack, cancer or a stroke.

To give you a perspective: there are 800+ insurance companies in America. Yet only a handful of them carry full living benefits. From those, Equis has secured an A-Team lineup of relationships and exclusive products.

Bottom line: you have access to and can offer products and services few other agents can offer! This will help you understand what living benefits are all about:

Our Culture is Second to None

We have an excellent product line you can feel good about and stand behind, but one thing we’re most proud of is our culture. The type of person we look for is someone who exudes our core values:

We understand it’s tough to be the CEO of your own business. That’s why we have an entire system set up to help you succeed. We have countless resources, including regular conference calls with Barry Clarkson (our CEO), trainings, conferences, podcasts, videos, in-person events and more.

We know what it takes to be successful in our space so we never compromise when it comes to our vision and culture. Watch this quick video to understand what we’re talking about:

What About the Leads?

Great question. As we said, no cold calling. Just getting back to people who mailed in a request asking for more information. Pretty simple, right? Equis spends an insane amount of money each month generating leads all over the country. Likely, there’s a bunch in your area.

These leads are your marketing. Rather than investing thousands of dollars in marketing hoping to generate some results like most business owners do, Equis provides leads for you. Yes, of course these leads cost money. It’s an investment in your business. And the leads cost? There are .50 cent leads, $2 leads, $4 leads, $7 leads, $20 leads, $41 leads and $67 leads, depending on the age and quality.

Each lead comes highly qualified, with a name, address, phone number and a bunch of other information the prospective client has volunteered.

So, let’s stop and look at the math…

On average, 10 A-leads can produce 6 appointments, which can produce 3 sales (it’s the 10-6-3 rule you’ll hear us teach). Sometimes it’s much better and you have a fantastic week. Sometimes it’s less and you have a down week. But the averages will tend to play out over time. All these numbers have been tried and tested nationwide over the years. It’s down to a science- so you don’t have to be the guinea pig.

That’s why some full-time agents invest heavily in their lead flow. The more business you have coming in, the bigger your paycheck. Is it required that we purchase the leads? Certainly not. You’re free to generate your own leads- warm market or cold. However you like. But this way just seems to make sense to most of us.

Here’s a diagram of how the leads are generated: 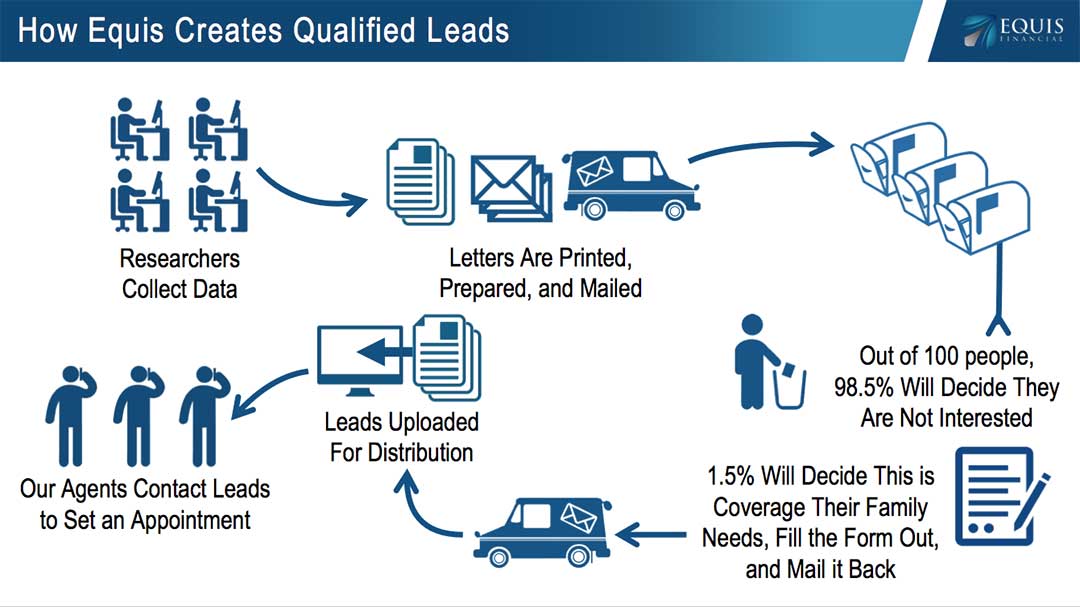 “The Dollars Have to Make Sense

Now the fun part: let’s talk money. After all, you’re not doing this for a hobby. So let’s walk you through how you get paid.

At Equis Financial, the commission rate starts at 70% (experienced agents can start much higher). But let’s use that as the basis to show how profitable this can be, even at the bottom run of the commission ladder.

Suppose you run an appointment and write a policy of $85 per month.

Let’s do the math:

* Note: This illustration assumes a product, such as Mutual Of Omaha’s Term Express, which pays at comp level. Your commission  results may be more or less than that depending on the policy, carrier and commission level. This illustration is to show the math on how commissions are calculated.

And what did you do for that commission?

Let’s pause for a reality check:

But you didn’t have to go to medical school for six years. No hundreds of thousands in student debt. Just one heck of a business.

Your commission within a few days of the policy being issued:

You’re paid directly from the insurance carrier. No boss. No manager. No HR department. Isn’t that refreshing?

The question is: how many times can you do that per week? Some folks do it 10X in a week. Others run their business part time and write two or three policies a week. It’s up to you.

If we stopped right here and this was the extent of the opportunity, we’d have hundreds or thousands of happy agents making a fantastic income across the US. But why stop there?

What if you could grow your commission rate? Guess what, you can! You can give yourself raises every month at first and every two months down the road, up to 120% on your own pen and even higher by leveraging a team.

We’re giving raises out all the time. And it’s entirely in your hands, not some manager’s opinion of you. The Equis System allows every agent the opportunity to get promoted every one or two months!

And now a quiz: run the same math using 110% commission and see if you get this same answer:

$1,122 commission for the same effort writing that same policy.

Not only does Equis have great starting commission rates but we also have an aggressive promotion and bonus schedule to top it off.

And for those who want to get serious about it, there is plenty of opportunity for bonuses and advancements. If you’re a leader you’ll enjoy regular bonuses at every level.

Bonuses are nice, but they don’t bring financial freedom. The way to do that is to build an agency. Every time you hire a new agent, you will receive a manager’s bonus in the amount of the spread between his commission and yours on every piece of business he writes.

In our industry, it’s called an OVERRIDE.

For example, if you’re contracted at 80% and one of your agents is contracted at 70%, you’ll receive a 10% override commission on every policy he writes. Imagine having 3-5 agents writing three policies a week, part time. That’s an extra few thousand bucks a month in your pocket…of passive income.

Click here to open up a presentation that will walk you through this part in much greater detail:

What if Override Went on Overdrive?

The override thing is very powerful. Many agents are bringing in hundreds of thousands of dollars a year because of the power of that one principle alone.

But what if you could get an OVERRIDE commission on the entire company?

Only at Equis can you do that. When your team produces enough volume, you qualify for the Equity Bonus (an override on any policy written throughout the entire company, nationwide).

The Equity Bonus comes in three levels of awesomeness: .33%, .66% and 1%. Right now that translates to about $16-17K a month…but that’s only because we’re just getting started. Can you imagine a $16-17K monthly bonus landing in your bank account to start your month?

If you truly want to geek out over the numbers, here’s a file to chew on.

Your numbers are the heartbeat of your business. Equis has utilized state-of-the art technology for your agent dashboard website so you can know real-time stats about the health of your company at any given time. We track apps (applications), submitted, pending, paid and relevant statistics. Your dashboard also includes progress toward your next bonus, goal, incentive trip and more.

In the spirit of transparency, we also showcase how everyone ranks on the leaderboard.

Your website gives you access to your client database, leads, training, marketing tools and more. Let’s take a look a screenshot of how this all looks: 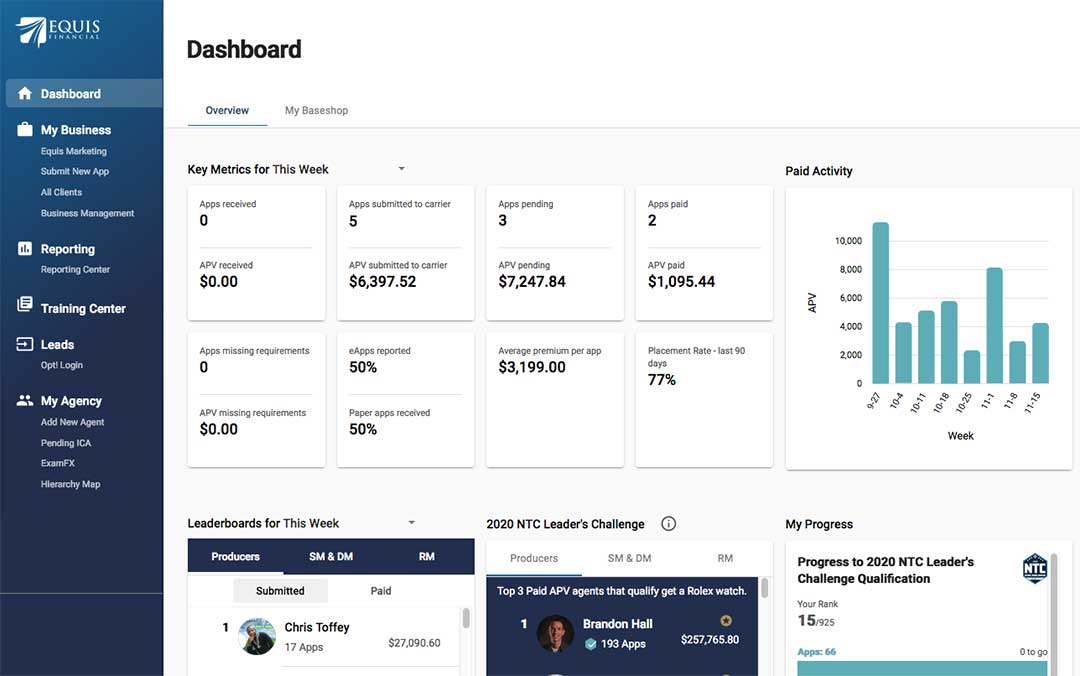 Here’s what we’ve gone over:

Admittedly, it’s a lot to chew on. And we don’t want to paint too rosey of a picture. In fact, the ONLY thing we can guarantee you is a tough time.

We’ll be the first to say, this opportunity is not for everyone. This will be challenging and it’s going to take some serious effort, commitment, dedication. That’s why toughness is one of our values.

You bring the commitment, the work ethic and the attitude. We’ll provide the rest.

But is success easy to achieve in ANY business? Nope. And you should run away from anyone who says it is. But here you can compress the time frame with a proven system, a team with a vested interest in your success and a vehicle to take you as far as you want to go…in a trillion dollar industry.

If you like what you see and are ready to jump in, the process is simple. Don’t worry- we will help you with every step along the way.

Here’s the process of getting started:

Your next step is to schedule a phone chat so we can get the rest of your questions answered or get you started if you’re ready.